US citizens seemed to be taking a liking to Bitcoin and other cryptocurrencies, two recent reports suggest.

Yesterday, US bank JPMorgan said younger investors were “likely to choose Bitcoin” as an investment over gold while a report from last week stated Americans were investing their “excess” cash into cryptocurrencies.

Both developments suggest the same outcome: That cryptocurrency adoption and investment are rising in times of economic uncertainty.

Falling interest rates are tempting some Americans to forgo safety and pour their savings into assets such as stocks and Bitcoin, noted Bloomberg. The move comes as traditional stores-of-value — such as low-interest bank accounts — are losing relevance as “risky” assets provide massive returns.

The report said it’s now “standard advice” in personal-finance subreddits and Facebook groups to keep extra cash in high-yield savings accounts. However, rates on those have fallen steadily for the past year. 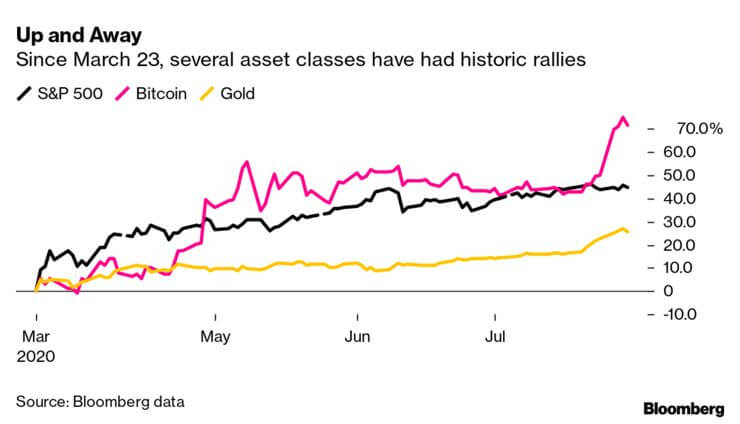 Ally and Marcus — the consumer arm of Goldman Sachs Group Inc. — gave investors rates of only 1% and 1.05% in July (while DeFi projects like Yearn Finance boasted 1,000%) respectively. They have both fallen from last year’s 2% interest after the US Federal Reserve cut rates for the first time since 2008.

But means a very small gain for most investors, one that’s eaten up by the ill-effects of inflation. In contrast, assets like Bitcoin and gold gave returns of 55% and 29% this year, while Ethereum, Chainlink, and some DeFi tokens, gave a minimum of 300%.

Still, the report suggests the upside is yet not fully realized. While Americans are confident about the market, in the long run, 28% of surveyed respondents chose the stock market as their top choice for long-term investments.

Only 18% of respondents chose cash investments such as savings accounts or CDs, while a smaller number presumably chose cryptocurrencies.

Younger ones go for crypto

JPMorgan analyst Nikolaos Panigirtzoglou said in a report Wednesday that younger investors are generally interested in alternative assets like Bitcoin.

Older generations continue to use bonds as their favored instrument for excess liquidity, evidenced by their “strong buying” during both June and July.” The analyst referred to investment flows for their report.

Gold and Bitcoin ETFs have been experiencing strong inflows over the past five months, as both old and young see the case for an “alternative” currency, added Nikolaos.

However, that’s not to say older generations are not warming up to Bitcoin. Earlier this year, investing legend Paul Tudor Jones said his $22 billion Tudor Investments firm holds over 1% of total assets in Bitcoin futures.

And with the current economic climate of over-inflation and excessive money printing: Choosing crypto seems a lot natural.

The post Americans are “pouring” cash, stimulus checks into Bitcoin and gold appeared first on CryptoSlate.

Why Ripple CEO Brad Garlinghouse is against Coinbase’s apolitical stance