Even after a 20-30 percent correction from the recent highs, Ethereum decentralized finance coins are up hundreds of percent in 2020 alone. To illustrate this best, Aave’s LEND token has gained in excess of 5,000 percent since the start of the year.

The extreme strength of these coins has led some to think that these markets are overvalued.

Ari Paul, CIO and co-founder of BlockTower Capital, recently stated on DeFi as a whole market:

“A basic trading rule (that I learned the hard way several times) is that when parabolic (true parabolic) advances break, you don’t look to buy until most of the parabolic move is reversed. In BTC tops, that’s meant waiting for 75%+ dips. In alts, 85%+. BTC had a clear parabola in 2017. A less clear one in 2019. Defi just had one burst.”

Others, though, have taken a different view.

One analysis of market data suggests that at the moment, DeFi coins are actually undervalued as their underlying platforms see drastically increased usage despite the consolidation seen in the market.

Is DeFi overvalued? Data shows it might actually be undervalued

According to an analysis shared by Jeff Dorman, a Wall Street investor turned CIO of Arca, compared to where DeFi coins were last month, they’re extremely undervalued.

The analysis shows that while most DeFi coins like Maker’s MKR, Aave’s LEND, Curve’s CRV, and others are down 20-50 percent in the past month, the revenue these protocols are generating is up dozens to hundreds of percent.

Dorman sees this divergence as a potential opportunity for long-term value investors in the crypto space:

“Not all tokens are created equal. Some accrue no economic value regardless of earnings, while others directly accrue value when earnings increase. This is a perfect setup for value investors — the sector is collectively dumping, but there will be long-term winners and losers.” 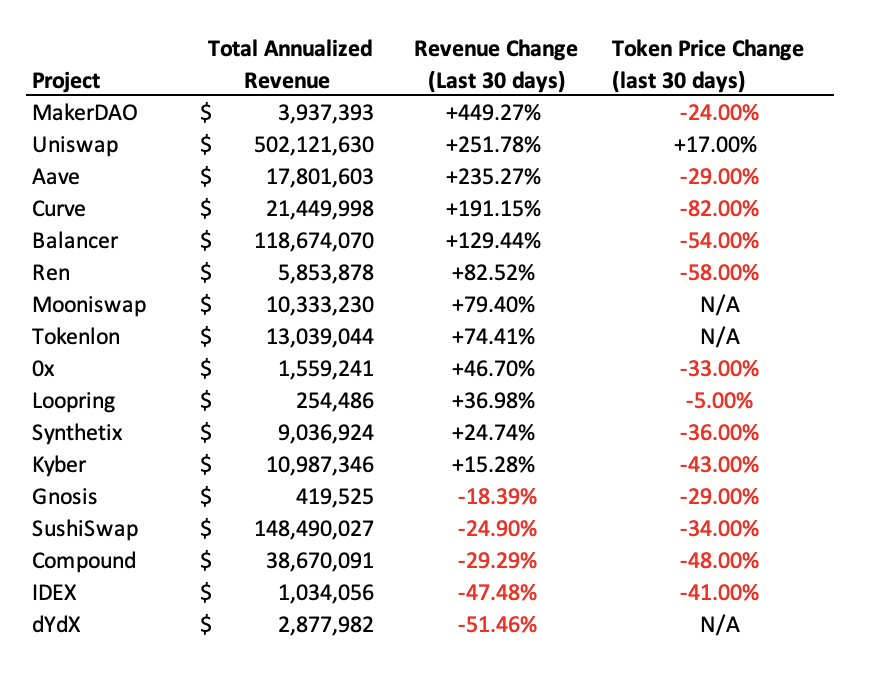 While DeFi coins may be relatively undervalued to where they were last month, that doesn’t mean that their parabolic ascent will continue right now.

Andrew Kang, the founder of DeFi-focused crypto fund Mechanism Capital, recently noted that there’s a good likelihood this segment of the market enters a period of consolidation.

“So what happens over this next period? Probably some consolidation and range trading (Index +/- 30%) for a few weeks as overexposed players continue to rebalance and some new funds flow in buying these re-rated assets.”

Where are we in the DeFi market?

Probably somewhere between First Sell Off and Bear Trap

Kang did note, though, that the next phase of growth is likely nearing.

He cited the fact that “the innovation and pace of development continues forward at a blistering pace” while there are large swaths of capital entering the space through new funds or through new demographics dabbling in Ethereum and DeFi.

The post Data: Ethereum DeFi is heavily undervalued, even at $13b aggregate market cap appeared first on CryptoSlate.

Bitcoin breaking $14,000 will bring a new “regime” of market dynamics

How IOHK built Cardano from the ground up