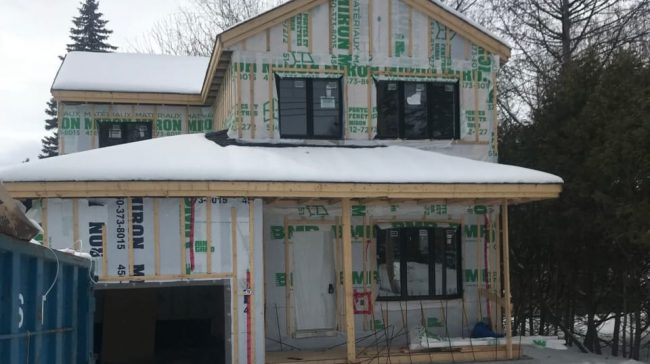 Sellers posted real estate properties on Internet sites stating that they would accept a payment in virtual currency. A marginal phenomenon, so far, but for which real estate professionals are unprepared.

Gary Gaul, owner of a construction and renovation company, is one of these precursors. Active in the bitcoin mining industry, he has made the bet to offer this mode of transaction for houses he is building, in the West Island of Montreal.

He admits it is partly a marketing move, to attract the attention of some buyers. It is also a way of speculating on the course of bitcoin, with the hope that its value doubles by the end of the year. For now, however, Mr. Gaul has not received any cryptocurrency offer for his homes.

To date, [I receive] a lot of requests. I would not say that they are people who are willing to buy, but they ask me how it works with the notary, how it would work taxes … In fact, I do not have all the answers.

Real estate transactions in bitcoins raise many questions, linked in particular to the risk of volatility. Between the offer to purchase and the conclusion of the sale, the value of the cryptocurrency can vary significantly.

Gary Gaul explains that a price in dollars would be first fixed; he says he is willing to take the risk of a decline in the value of bitcoin.

In Quebec, properties that are for sale against bitcoins are displayed by individuals, with some exceptions. Real estate agencies here do not seem in a hurry to enter this market.

Sotheby’s International Realty has adopted a Canada-wide policy stating that its agents will refuse such transactions.

There are too many unknowns with which we are not comfortable, especially for our sellers. We do not want to put them in a situation where there may be an error or a problem at the time of signing the deed of sale.

Sasha Brosseau, Vice President of Brokerage, Sotheby’s International Realty, Quebec and Canada
When going to the notary’s office, several other questions would appear. First, notaries are not allowed to deposit bitcoins into their trust accounts. Bitcoins should therefore be transferred directly from the buyer to the seller.

Then the notary would not necessarily be comfortable concluding the transaction. The notary Sevgi Kelci, who has written a doctoral thesis on cryptocurrencies, admits that she would not venture there herself.

There are many, many questions at the ethical and legal [legal] level that are there. Right now, I’m not ready to accept a bitcoin transaction.

Ms. Kelci believes that in the future, real estate transactions in virtual currencies should become more frequent. The profession of notary will have to adapt to it. But it will require, according to her, that changes are made in the laws, in order to dispel the uncertainty surrounding the use of cryptocurrencies.