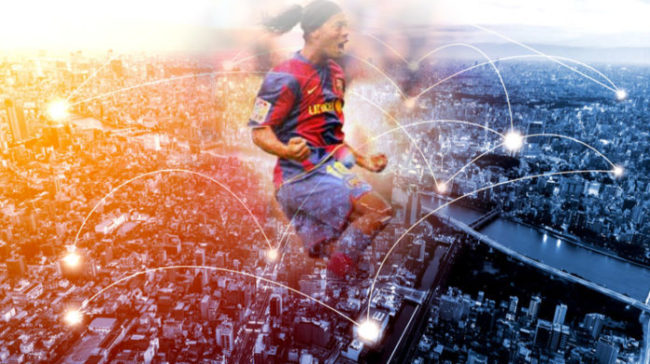 WSC recently announced that it launched a new soccer business which is going to combine both digital and real services. To make things even better, WSC is partnering with a Ronaldo de Asis Moreira (Ronaldinho) who is soccer legend and will create more than 300 Ronaldinho Digital Stadiums.

“WSC will be founding stadiums at 300 locations around the world over the following three years, bringing smiles and happiness to all children” stated WSC. The 300 locations include Asia, Africa and the Middle East. Nonetheless, the reason why there is so much excitement surrounding these stadiums is because they will use blockchain, AI and VR technology.

Ronaldinho is proud to announce that there will be Super League where everyone is welcomed. The league will include professional and amateur players who will get to compete against each other. Moreover, the Super League will last throughout the year and matches will take place in all 300 locations.

The Super League will use cutting-edge analysis technology which implements AI in order to record individual player skills and abilities. These skills are then going to be compiled in a special database which will be created via blockchain technology.

eSports keep evolving and it looks like WSC and Ronaldinho want to help it get to the next level. WSC announced that it will launch an online platform that will partner with soccer game companies all over the world and that it will provide them with a platform where skilled players can compete. In addition, WSC promises that famous soccer players such as Ronaldinho himself will host some of these eSports event.

Everyone will be able to have fun with the new project started by WSC and Ronaldinho, even though they might not be playing because WSC will launch a betting platform where people can access it through smartphones and computers.