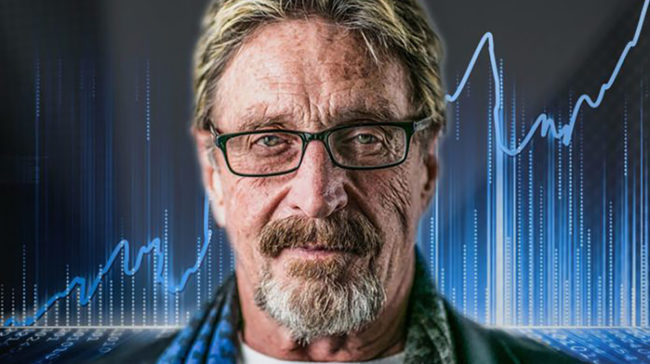 John McAfee is a famous tech-centric entrepreneur turned into a crypto enthusiast. He recently had an exclusive interview with CoinTelegraph and discussed the current state of cryptocurrencies.

Overall, he maintains his belief that Bitcoin will surpass $1 million in 2020.

The interviewer asked him at one point how he sees the future value of BTC. McAfee said that the growing number of transactions and people using the Bitcoin Network show that the value of BTC is definitely increasing a lot.

Ethereum World News reported a few days ago that Diar which is one of the leading newsletter publications in the cryptosphere had noted that the number of on-chain BTC transactions in Q3 2018 has breached a quarterly-to-date high.

BTC transactions counts have been increasing month-over-month by 3-5% for the past nine months and this validates McAfee’s claims.

McAfee added that investors should not be fazed by the crypto market’s bearish trend and he highlighted that this artificial pressure has created just a temporary issue for crypto.

He stated that if “you track the usage curve [of Bitcoin],” $1 million per BTC by 2020 (which is his original prediction) is quite conservative. He added that eventually, BTC will be valued by its usage, not by speculative factors and investors, according to Ethereuum World News.

McAfee also said that “the real value of $1 million could be drastically different than today due to the hyperinflation of fiat or other overarching fiscal qualms,” Ethereum World News reported.

McAfee also addressed the importance of crypto and blockchain technology.

He explained that the financial system is controlled by centralized institutions such as the Government and the FED. He said that in the eyes of many, this system has worked well, but the fact that centralized authorities can inflate and deflate fiat circulation or increase interest rates show that we’re far from being free.