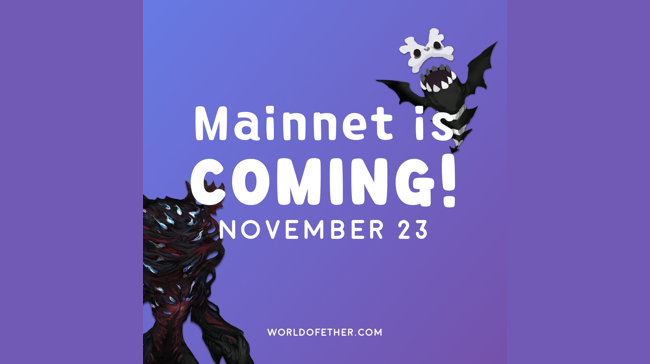 On November 23rd, World of Ether, a collectible video game heralded to “save Ethereum,” is set to release.

This is a big deal because the game has been in development for nearly a year, longer than any other crypto game. While we haven’t tested the progression in the game, as progression is only available on their mainnet launch, with all the time taken we have high expectations.

Why Could World of Ether Change the Entire Blockchain Industry

World of Ether’s Beta alone had three times the simultaneous users of the top ranking blockchain game, CryptoKitties, which has maintained this title since 2017.

Simply put, what we’ve seen from the World of Ether beta has been unlike anything we’ve tried in blockchain. They even have a custom made soundtrack, on Spotify here, and everything in the game is custom made with more care than we’ve seen from other games out.

The reason this could change the entire blockchain industry is because up to this point, most of the dapps out there, if not all of them, are hard to use. World of Ether has proven to be intuitive and also has a guiding NPC. For the mainstream to adopt dapps, they don’t need to understand blockchain and self custody, but they need to have an easy time using blockchain products. In terms of changing what’s possible, we expect this to be a new bar for decentralized applications. The bar is going to be set.

Watch a video review of the beta here.

As written before, the beta had 3 times the users that the current Mainnet dapps have. Playing the beta, we understood why. Despite the beta not using real money, and the assets not being usable after beta, it was fun. Legitimately fun: breeding, hatching, trying to get better monsters, selling on the marketplace… And all the artwork is unique instead of algorithmically computer generated.

This is a cool game and playing it I thought, “As fun as this is now, when these monsters can be traded for actual ether, it’s going to be so much more fun.”

Something else that stood out is that the marketplace and breeding has economics baked into the game mechanics.

There can’t be overpopulation since it takes longer to breed with monsters each time they’re bred and breeding rarer monsters appears to give better breeds, increasing their utility beyond battling (which is coming out on Nov. 23rd).

When “WoE” opens on the Ethereum Mainnet, battles will be in beta, but the creators of the game will be giving out 4 ETH (about $700) to winners of battles.

It was also rumored last month that there would be a large monster discovery reward. What does this mean? During the actual beta which launched in September, the team gave $10,000 out to players who were the first to hatch “species of monsters.” They’re doing that again for their mainnet release but using (rumored) a lot more money instead of $10,000.

This game is like Pokemon meets crypto meets economics.

Truthfully there’s a lot of things that made our experience with beta great, a list too long to put here. We’re amped to play battles and to hatch our eggs on Mainnet, to level up, to sell and buy monsters for real money, and discover the best, strongest, and rarest monsters out there.