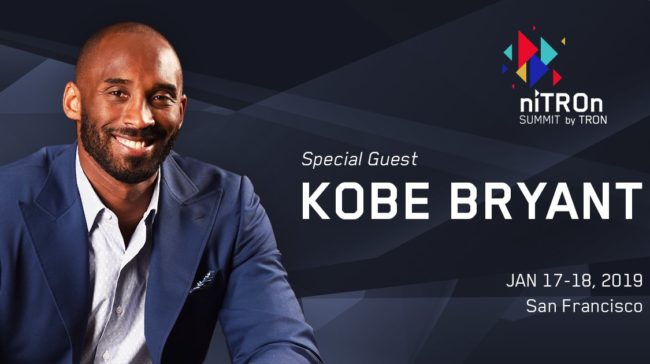 The NBA legend Kobe Bryant is now confirmed to be speaking at niTROn 2019 which is the inaugural international crypto conference that’s organized by Tron.

Back in October, CCN has reported that the former US president Bill Clinton delivered an address at Ripple’s Swell conference which took place in San Francisco and he said that the blockchain technology has tons of possibilities.

Kobe Bryant will be part of Tron’s conference

This latest Tron-related news only comes to highlight what Clinton said even more. Bryant is slated to be included into the NBA hall of fame in 2021 after a highly successful career of 21 years.

He won two Olympic gold medals with the US Men’s basketball team. Since he retired, he had done a lot of work with media projects, but this will be his very first taste of the world of cryptos.

His involvement in the crypto space like this is a highly significant sign for the crypto community, says CCN, as it could provide an avenue for one of the most respected sports figures in the world to introduce crypto to his more than 14million Twitter followers.

Looking forward to having @kobebryant, CEO & President of Kobe Inc and #NBA legend, at our first international conference #niTROn2019!! Excited to exchange insights on entrepreneurship! Join the event https://t.co/ahMTEsixkg pic.twitter.com/WP7Gjcmx6D

The niTROn summit aims to appeal primarily to sectors that have not been yet initiated to the crypto world and the blockchain tech. the use of such a popular figure definitely has marketing reasons behind it, but it will also be more than exciting to see Bryant’s genuine thoughts on crypto.

Speaking to Forbes about Bryant taking part in the summit, Sun said:

Justin Sun is also set to share some pretty interesting new plans that Tron has during the summit.