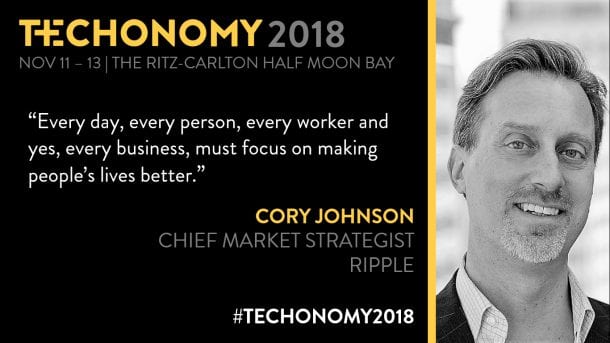 Ripple’s Cory Johnson spoke about the company during the Techonomy 2018 conference, and he addressed the subject of cryptos and the blockchain technology.

Techonomy 2018 took place between November 11 and November 13 and it “was a probing, wide-ranging conversation about the tech-inflected issues that affect business and our world. This year’s theme was Harnessing Tech for Responsible Growth, and as always we addressed many of the issues facing leaders today,” according to the official conference report.

Cory Johnson believes Ripple I sone of the most advanced companies

Johnson sees Ripple as one of the most advanced companies in the cryptosphere, and he said that the team behind it has been working really hard for years to develop services and products for financial institutions and banks.

He talked about the entire blockchain ecosystems, and he said that Ripple began the building of the Internet Of Value.

They are reportedly trying to solve all transfer related problems. Johnson’s goal is to see money being transferred the same way as information.

“We’ve got around a 100 paying customers, we’ve moved over a billion dollars on the network, and we’re opening new corridors. When I joined the company, around nine months ago, they were doing one deal in 6 weeks. Now it’s six days.”

Johnson compared XRP and BTC, and he said that when the team developed XRP, they did this having Bitcoin 2.0 in mind.

They wanted to eliminate all the stringent issues that BTC is currently facing regarding the slow speed of transactions and high costs as well.

The guys who made XRP, they looked at the white paper that Satoshi wrote about Bitcoin and said ‘this is amazing,’” said Johnson.

He continued and explained that “This could be reasonable at scale but what would the problems be. There might be problems about needing total openness in every transaction.”