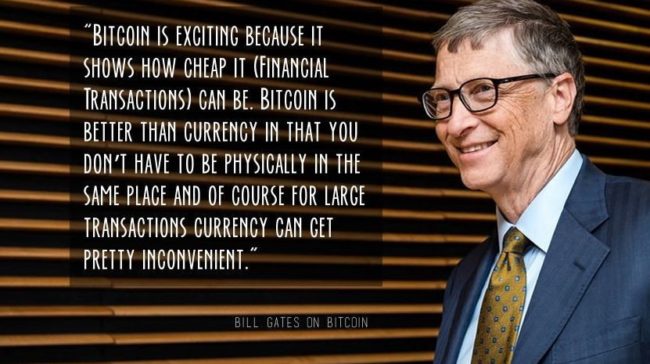 Microsoft’s Bill Gates has expressed his interest and love for cryptos for quite a while. In a recent video, the man made it very clear that he believes crypto has the necessary means to empower the poor.

Back in 2014 while he was talking to Bloomberg, here’s what he had to say about Bitcoin vs. fiat currencies:

“Bitcoin is better than currency in that you don’t have to be physically in the same place and, of course, for large transactions, currency can get pretty inconvenient.”

Crypto can help the poor and unbanked

Recently, Gates has been addressing the financial system, crypto, human resources, and poverty as well.

He referred to the people who the crypto space calls the “unbanked” and he suggested that the poor people in the world may not have the necessary financial tools in their lives, but they should not be underestimated for this reason at all.

Basically, he highlighted that crypto and related financial systems can definitely help those who are now living in poverty.

He also said that the digitalization of money could support developments in areas such as agriculture and health and this is already happening in Africa.

He gave the Sen Exchange as an example. They use the SUNEX reward tokens, and the founder made it very clear that such schemes are crucial for people who are living in poverty or the unbanked.

“Together, we are working towards a world where no one is forced to cook with unsafe kerosene or wood-burning stoves, no child has to worry about how they will study after dark, and lack of energy access ceases to propel cycles of poverty,” Abraham Cambridge, Sun Exchange founder and CEO said.

Bill Gates also highlighted that transactions could become 90% cheaper with digitization. Here are his thoughts about the next essential step in the process:

“I see two priorities for the immediate future. First, we need to drive the policy changes to make sure the poor can get engaged at this level and second, we need a measurement system that tracks the progress towards drawing people in not just have accounts but to benefit from the financial activity.”