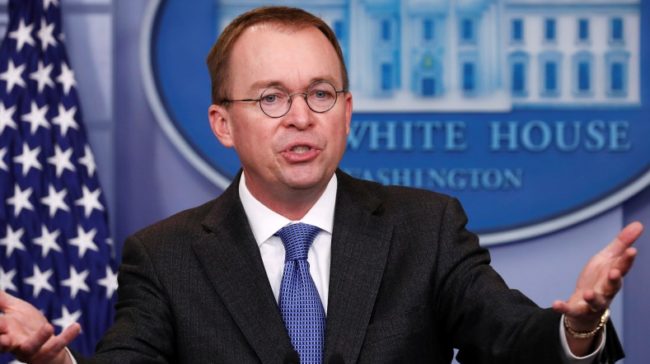 Donald Trump just named the director of the Office of Management Mick Mulvaney as the new acting White House Chief of Staff.

“I am pleased to announce that Mick Mulvaney, Director of the Office of Management & Budget, will be named Acting White House Chief of Staff, replacing General John Kelly, who has served our Country with distinction,” Trump announced.

He is a huge Bitcoin and blockchain fan and supporter. During his time in the House of Representatives, he helped create the Blockchain Caucus which is a group of House lawmakers dedicated to creating responsible new policies on the emerging technology.

“Blockchain technology has the potential to revolutionize the financial services industry, the U.S. economy and the delivery of government services, and I am proud to be involved with this initiative,” Mulvaney said at the time.

Two pieces of legislation have been introduced

Back in October, the Blockchain Caucus brought two pieces of legislation in order to create a regulatory approach of the blockchain tech that supports both innovation and growth. These proposals were “designed to increase the support and growth of the technology’s implementation in the public and private sector to improve overall privacy, transparency, and efficiency.”

Meanwhile, House Resolution 7002 would “amend the E-SIGN Act to confirm the applicability of blockchain to electronic records, electronic signatures, and smart contracts.”

I am pleased to announce that Mick Mulvaney, Director of the Office of Management & Budget, will be named Acting White House Chief of Staff, replacing General John Kelly, who has served our Country with distinction. Mick has done an outstanding job while in the Administration….

This year has been a pretty difficult one for crypto enthusiasts as they had to witness the bearish market and the fall of Bitcoin’s price harder than ever.

Many people have been discouraged by what happened by most significant voices kept saying the same thing – that the price of cryptos is not that important and anyone who enters this game should be thinking on the long-term rather than just watch the coins’ prices on a daily basis.