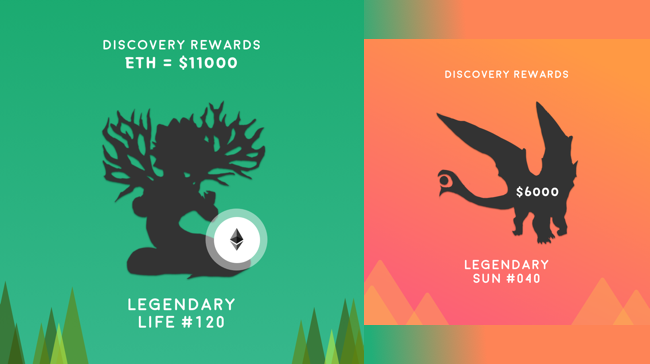 World of Ether is back with their new announcement. They’re giving $11,000 in ETH to the first player to discover the Life Legendary monster.

This is on top of the existing $6,000 on the Sun Legendary monster, and the thousands of dollars of rewards that were already paid to players.

A Needed Boon for Blockchain Games

With ‘crypto winter’ in full swing, a stunt like this is a breath of fresh warm air. Many projects are going bust, not giving their users what was promised, and not delivering. World of Ether has done what other projects have not done- delivered.

The developers delivered a game with a custom soundtrack, non-autogenerated artwork, and fine tuned game mechanics. Playing suggests a positive future for what these crypto based games may eventually do.

Most of the World of Ether game is decentralized, whereas many competing games only use ERC721 tokens, but do not decentralize game mechanics.

ERC721 tokens can only yield decentralized gameplay when the mechanics are built into the tokens, as Gods Unchained, another Ethereum game, shows. Gods Unchained is currently in Beta.

How to Play World of Ether

World of Ether is a collectible game and most resembles Pokémon mixed with eBay. You discover ‘Etherian’ monsters, battle them to level up, level up to discover rarer and more powerful Etherians, breed your Etherians to make more, and sell your Etherians to other players for cryptocurrency.

The marketplace and breeding has economics baked in. There can’t be overpopulation since it takes longer to breed with Etherians each time they’re bred and breeding rarer Etherians appears to give better breeds, increasing their utility beyond battling. World of Ether is live and you can play now with MetaMask, Trust Wallet, or Coinbase Wallet.

How to Play Other Ethereum Games

Blockchain games are at a crossroad with an epic battle taking place between Ethereum, EOS, and Tron.

Ethereum was the first blockchain to have non gambling crypto games with people actually playing, EOS the second, and Tron the third. EOS doesn’t have gas fees, but is less decentralized, and Tron is similar.

It’s hard to say which blockchains provide better user experiences, and Tron and EOS are actively trying to poach games from other blockchains. The more great dapps a blockchain has, the more legitimate that particular blockchain becomes.

Hundreds of millions of dollars were poured into these blockchains and none of them want to disappoint their token holders with a lack of activity. All of these blockchains need apps, and it’s easier to port an existing decentralized game onto it than it is to make a new one from scratch. The battle between these chains is fierce and real.

Who Will Be the Winner?

The future of cryptocurrency and blockchain games may very well be a blockchain that hasn’t even begun development or conception. The technology is new, and we will see what happens.