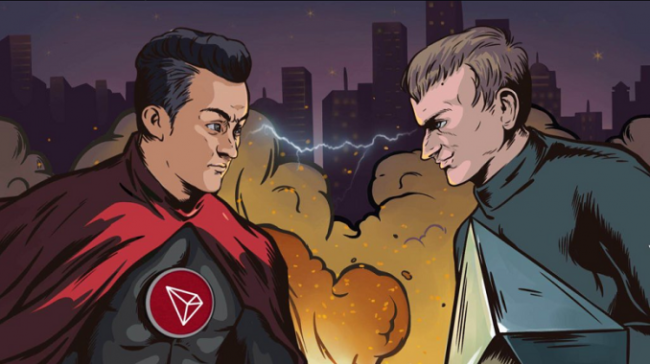 Tron’s Justin Sun and Ethereum’s Vitalik Buterin have been poking each other online for quite a while now, and crypto enthusiasts know this.

Recently, Sun thanked Buterin for a remark that he had made a while ago about BitTorrent before it was bought by Tron.

Buterin said BitTorrent was an example of a successful dApp

In the latest series of pokes between the two crypto bosses, Sun highlighted that Buterin praised BitTorrent as the first example of a truly successful decentralized application when Sun had not bought it yet.

As you all know by now, Sun bought BitTorrent back in the summer of 2018 for $140 million.

In the comments section, Sun’s followers also poked Buterin, as expected, but not everyone seemed against him.

“Not defending @VitalikButerin here, but don’t you see the irony here that BitTorrent was a decentralized system until @justinsuntron comes & buys it to centralize it & issues legally questionable tokens – and then he brags how decentralized it is with tokens he printed & controls,” someone posted in the comments section.

Thank you @VitalikButerin for standing out! I have a secret campaign especially for you in #ValentinesDay! Don't forget to join it! #TRON #TRX $TRX #BitTorrent #BTT $BTT https://t.co/rQsVsLtBKf

But more voices have been writing in the thread that instead of poking and fighting each other, crypto enthusiasts should be working together because they all have the same goal of supporting crypto and the blockchain tech.

Tron has been competing with Ethereum for quite a while now, and the latest news made Justin Sun happy.

This report reveals that dApps on EOS and Tron are powering a lot more dollar-for-dollar transaction value compared to Ethereum (ETH).

A while ago, Sun told the developers on Etehreum to move their dApps on the Tron blockchain, and it seems that a lot of them did precisely that, which we bet makes Sun more than proud.