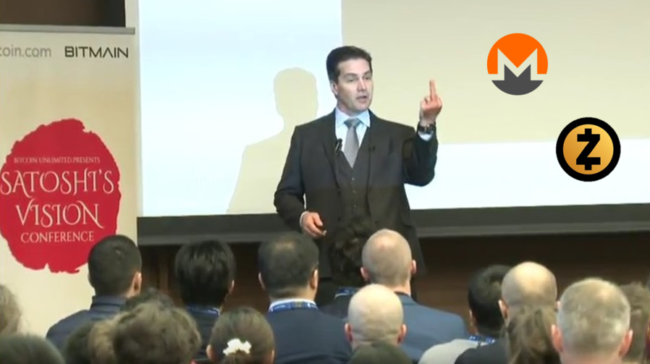 Just in case you’ve been missing the self-proclaimed Satoshi, Craig Wright, you’ll be happy to know that he’s back in the news. This time, he seems to have his eyes set on the most important privacy-oriented coins, Monero and Zcash.

Wright brags he knows how to kill ZEC and XMR

Wright has recently told CNBC that he knows the way in which to destroy XMR and ZEC. He also made sure to highlight the fact that he’ll be exposing these menacing digital assets before the end of this year.

“If you have a privacy coin, I will show you that it is basically as private as running through Times Square with your pants around your ankles,” he said as reported by CCN.

Yes, I can make ZCash and Monero completely traceable…

A means to start monitoring it all and attributing.

And, responsible disclosure is not those teams.

Have a nice life.

The online publication continues and writes that if Wright is correct, then this is pretty sad news for the dark web traders and hackers.

They reportedly prefer XMR over Bitcoin due to enhanced protection.

Here’s what Craig Wright posted on Twitter a few days ago: “I would rather teach the Feds how to stop this than help a bunch of losers help criminals.”

You should definitely head over to CCN’s original article and read the whole Monero-related debate.

Not my issue, you use an anon coin, a crime coin as this is all they really are, and you are in many countries already committing a crime.

So, I would rather teach the Feds how to stop this than help a bunch of losers help criminals

People slammed Wright in the comments section. Someone told him, “According to your logic, cash is a “crime coin” as well. I can spend it anonymously.”

And Wright responded with: “No, you just have no idea that cash is covered by laws, that it has serial numbers, that it has RFID chips, that it requires reporting.”

Another follower was having too much fun and hopped in the comments section to write “This guy thinks he can track the digital money that the fed prints ? ??this guy just said that digital money has RFID chips. How does this guy still have followers?”

Wright concluded by inviting everyone to read one of Business Insider’s article.