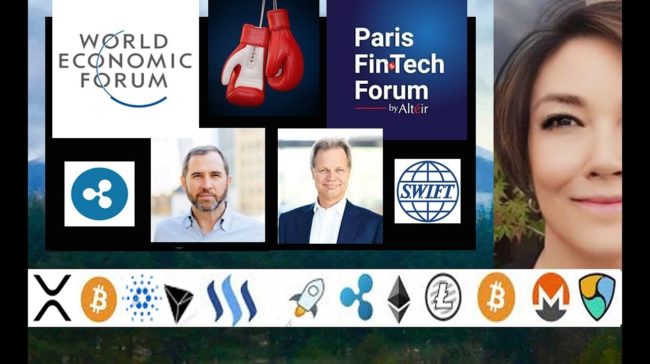 Brad spoke alongside the CEO of SWIFT Gottfried Leibbrandt. The latter is set to step down as SWIFT’s CEO in June.

Ripple CEO has a job offer for SWIFT CEO

During the Paris Fintech Forum, Garlinghouse had a job offer for Leibbrandt. The moderator asked him to share his experience at SWIFT and the legacy that will be moving on after he worked there for decades.

The man answered and said that GPI is a big part of the legacy which would transform the banking industry and while he was speaking, Garlinhouse just offered him a job. He said, “Ripple is hiring.”

CNBC’s Elizabeth Schulze moderated the panel which was fascinating as both CEOs discussed the future of cross-border payments and the financial system in general.

Specifically, the panel was scheduled with the main focus on the topic about finance – ‘Let’s Send the Money.’

Ripple is focused on hiring new developers these days who can help customers better integrate the products xRapid and xCurrent.

Ripple’s director of talent Jim Chauncey-Kelly said that the new hires are vital as the company builds strategic partnerships around the world.

“Right now, roles that I’m thinking of that are quite critical are integration engineers. That role essentially helps our customers on-site implement our products globally,” he stated.

The company just welcomed Stuart Alderoty, veteran legal expert and former General Counsel at CIT and HSBC on board.