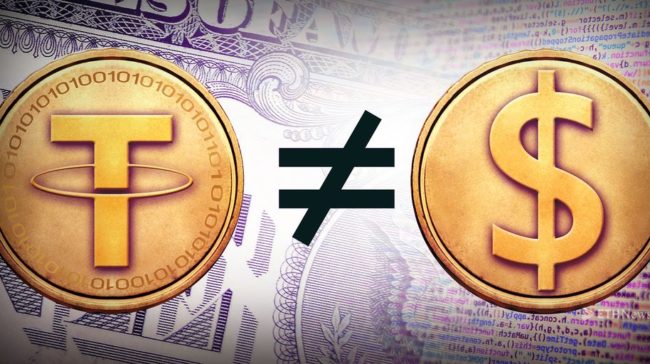 Everyone was confident that Tether (USDT) is a stablecoin which is fully backed by the US dollar.

But the latest event triggers some doubts in this regard, and this is not even the first time that this is happening.

There’s an update which has been quietly made to the official Tether website, and this is the catalyst of all these doubts regarding the backing of the stablecoin.

The update says that sometimes, the reserves for the stablecoin can also include other assets than the US dollar.

This was not stated before when the site used to claim that the stablecoin is 100% backed by the US dollar. Here’s what the website says now:

“Every tether is always 100% backed by our reserves, which include traditional currency and cash equivalents and, from time to time, may include other assets and receivables from loans made by Tether to third parties, which may include affiliated entities (collectively, “reserves”). Every tether is also 1-to-1 pegged to the dollar, so 1 USD₮ is always valued by Tether at 1 USD.”

Before this, the official website was stating that Tether is 100% backed by the US dollar.

“Every tether is always backed 1-to-1, by traditional currency held in our reserves. So 1 USD₮ is always equivalent to 1 USD.”

Despite this whole controversy, USDT remains the largest stablecoin in the crypto market.

Tether teamed up with Tron

Recently, Tether made headlines when the partnership with Tron was announced.

Tron is teaming up with Tether to integrate the USDT stablecoin on the Tron blockchain. This will reportedly highly support the entire Tron ecosystem.

We are making big steps to achieve decentralized finance with @Tether_to. #TRON will soon have its own stablecoin! This will benefit our entire ecosystem and make it easier for institutions to access the TRON blockchain?? $TRX $BTT https://t.co/8mGcypBf9J

“This integration will elevate our dApp ecosystem, increase DEX liquidity, and enhance accessibility for Partners and institutional investors,” the Tron Foundation posted on Twitter.

The Tron army of fans was excited by the news and the feedback that Justin Sun received was positive.