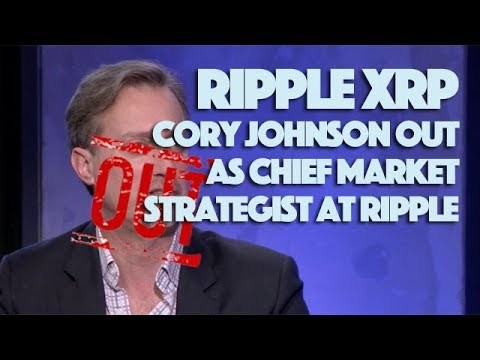 We recently reported that Ripple decided to wave goodbye to its Chief Market Strategist Cory Johnson.

The news triggered a lot of curiosity among the Ripple and XRP community, but unfortunately, not too many details are available yet.

Tom Channick, Ripple’s spokesman, told CoinDesk that Ripple has eliminated Johnson’s position and considers his time there a massive success.

“Cory’s last year at Ripple was a success in representing the company to investors, press, and regulators. Cory helped Ripple with strategy internally and overall industry education. But due to changes in market conditions, we’ve chosen to eliminate the role of Chief Market Strategist,” he said.

Now, EthereumWorldNews tries to figure out what are the real reasons behind what happened.

They address the reasons for which Ripple needed the man in the first place.

When he started working at Ripple, he was reportedly really excited at the thought of beginning to educate a market that seemed to have problems in understanding the true nature of XRP.

As we already said, Tom Channick, Ripple’s spokesman, brought up “the changing market conditions” as a reason for eliminating the role which Johnson had at the company.

Here’s what the online publication assumed: “Does this “changing market conditions” mean Cory is incompetent (…) Or, is there something underneath that we are not seeing? Like their realization that they won’t after all sign banks as fast as they had predicted.”

They also wonder whether the SEC has something to do with this.

EthereumWorldNews also asks: “Can this also be part of their negotiation with the SEC and they are slowly and surely eliminating the Marketing Department as XRP chart towards being classified as a “utility” just like ETH and Bitcoin is?”

These are indeed essential questions, and we hope to find the answers soon.