Ripple and XRP have been the stars of this week after the latest massive announcement that Coinbase.com has finally listed XRP. This was one of the Ripple’s fans wish for more years.

The community could not celebrate in peace, as more accusations for Ripple surfaced. The company has been slammed once again and accused of paying Coinbase in order to get listed.

Ripple slammed rumors that accused them of paying their way on Coinbase.

Another month, another massive XRP move made by Ripple.

The company has just moved 1 billion XRP out of escrow in an effort to sell a part of the digital asset to institutions, investors and crypto exchanges via over the counter deals.

This is not the first time that the company makes such moves.

At the beginning of each month, Ripple does this, and they end up placing about 700 million XRP back into escrow by the end of the month.

Ripple also seems to adore including strange messages along with XRP moves.

This time their memo said the following: “The revolution will be televised…”, and The Daily Hodl says that this is an apparent reference to Gil Scott-Heron’s The Revolution Will Not Be Televised. 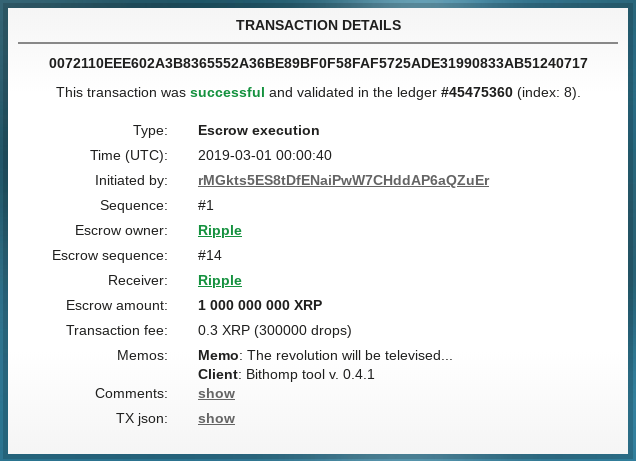 The last time that Ripple moved a massive amount of XRP, the San Francisco-based company wrote the following:

“Crawl… Walk… Run… ;)” – this note seemed to reference comments from CEO Brad Garlinghouse which have been made during a Quora AMA back in October of 2017.

He said, “payment providers and banks can use XRP to fund these payments on demand, without intermediaries, at a cost that is less than half of the current cost.”

Garlinghouse also said back then “But it’s safe to say that we have to crawl before we walk before we run.”