During the past week, Ripple and XRP fans had a lot to celebrate after the massive announcement saying that XRP gets listed on Coinbase.com.

We recently reported that this excitement did not last too long because the whole community found itself having to defend their favorite project.

Ethereumworldnews reported that a contributing writer to Forbes and author of the piece “JPM Coin From JPMorgan Chase vs. Crypto Fans,” Jason Bloomberg slams Ripple as a scam.

“While Ripple has been positioning XRP as solving cross-border financial transaction issues among banks, there are also indications that Ripple is essentially a scam,’ Bloomberg wrote.

The same publication wrote that his comments lacked robust evidence, and more than that, everyone knows the efforts made by Ripple in order to try and dissociate itself from this supposition that they are in control of XRP.

Debating the nature of Ripple

Now, the same author is back with another article in which he practically continues to slam Ripple and XRP.

In this article, he debates what nature of business Ripple is running.

“At its core, the Ripple business model is a pump and dump scheme, as it undergoes numerous activities to increase the value of the XRP cryptocurrency (crypto). Unlike most crypto pump and dumps, however, Ripple takes numerous steps to obscure this basic fact,” he writes and also ads a graph. 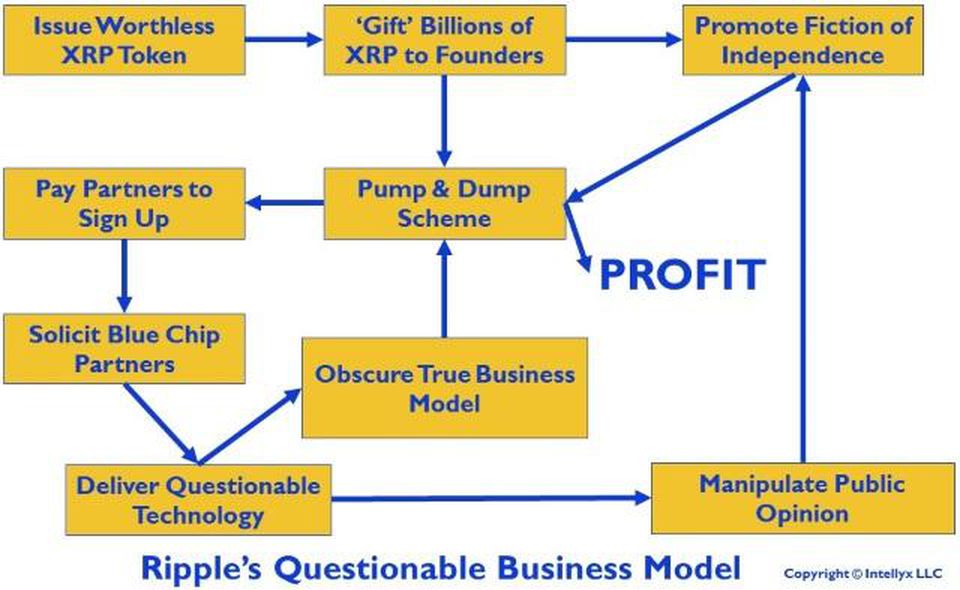 Bloomberg also talked about XRP being a security, the liquidity issue, customers of the company, technology and more.

You should definitely read his entire article on Forbes.

As expected the XRP and Ripple community were quick to defend the crypto company and XRP.

This is not the only accusation that Ripple has been faced lately. The company has also been accused of paying its way on Coinbase, and of course, Ripple denied such allegations.