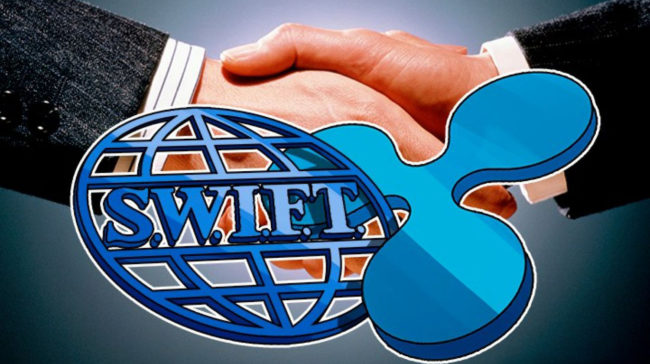 Earlier this month, Ripple revealed that they plan to attend the Society for Worldwide Interbank Financial Telecommunication’s annual conference aka SIBOS.

This triggered lots of rumors claiming that there’s a potential partnership in the cards, considering that SWIFT is Ripple’s competitor in the market that it’s targeting.

Anyway, Ripple’s attitude towards SWIFT has been proven more than once in the past, and more executives from the company made it very clear that they want to take over the market, not to team up with SWIFT.

This did not stop the XRP community on Twitter to continue spreading rumors which kept claiming that a partnership between the two is on its way.

Marcus Treacher, the Global Head of Strategic Accounts at Ripple, said in a tweet from the conference:

“Swift at sibos today: “The benefits of DLT are promising, but delivering it is still years away.” There are over 100 financial institutions with access to instant payments across 40 countries and six continents who would say otherwise.”

This was a reference to RippleNet that has already reached across 40 countries. They plan to create a seamless network for payments all over the world known as the Internet of Value.

Swift at sibos today: “The benefits of DLT are promising, but delivering it is still years away.” There are over 100 financial institutions with access to instant payments across 40 countries and 6 continents who would say otherwise. #Sibos

Nexo says it’s the first and only crypto lender and the famous company has just provided support for XRP. Now, users can benefit from XRP-based loans via the platform.

Omni is a sharing-economy platform that allows anyone to rent all kind of items in their home that they don’t use or need anymore and when someone rents your item, you will receive US dollars or XRP.