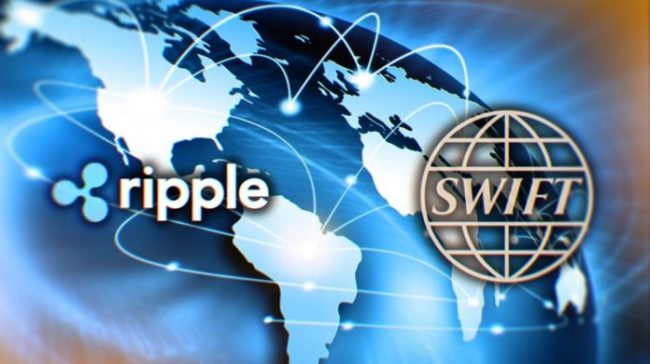 Ripple and SWIFT are the two main competitors these days when it comes to cross-border transactions.

If people used to believe back in 2018 that the two entities will eventually team up,

Ripple’s Cory Johnson and Brad Garlinhouse made sure to slam these rumors and highlighted more than once that Ripple is competition and their main aim is to overtake SWIFT.

They see this traditional decade-old system as being outdated and flawed.

What Ripple aims to do is fix all the issues that are plaguing SWIFT regarding cost, speed, and safety of transactions.

Euro Exim Bank will start using Ripple’s XRP-powered product xRapid in Q1 2019. Graham Bright, the head of compliance and operations at the bank, has recently told American Banker that it plans to use XRP in order to power payments across 80 countries to highlight the speed and efficiency of crypto.

“We’re interested in moving forward and creating a platform for payments for our clients who are in over 80 countries at the moment, making sure they have a smooth, frictionless way of paying local people,” he said.

SWIFT has been blamed by Bright who said that one of the bank’s transactions got lost on the SWIFT network.

“It was lost somewhere in the quagmire of a central organization, and we have no visibility on where it is. All the counterparty says is, ‘We have not received your message,’” he reported via Oracle Times.

Ripple and SWIFT will debate the future of the financial system

Ripple and the traditional payments system SWIFT will speak at the 1TC Conference in Germany.